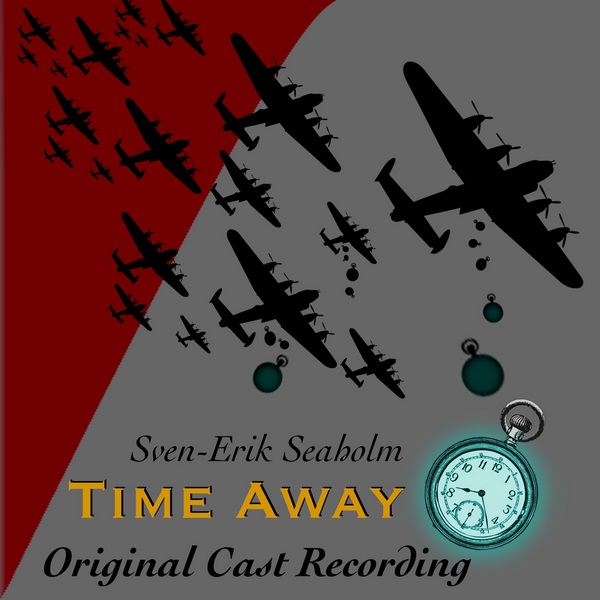 Seaholm was approached by a writer who was currently working on a theatrical musical, only he had no music. He asked if Sven would be willing to adapt his songs for the stage, making changes to older songs and writing new ones to the script.

Update Required To play the media you will need to either update your browser to a recent version or update your Flash plugin.

Time Away: The Musical

The curtain rises on a darkened basement in 1941. The only light emanates from the illuminated tuning dial from an old radio at one side of the room. The song playing is “Transatlantic Lullaby” performed by Geoffrey Wright, a popular recording of the day. The song’s lyrics describe New York City (almost ironically) as a peaceful and beatific faraway land. As the song continues, we begin to hear the bombs and destruction from one of the almost nightly blitzkriegs inching closer and becoming louder.

Suddenly, a shaft of light bursts through the door at the top of the stairs and several people seem to almost tumble into the basement. It becomes immediately apparent that a young woman has been injured. As two men frantically tend to her, one of them pulls a mysterious looking hand-held device from his coat and runs its greenish glow up and down the length of her body. Just as abruptly as her entrance, the young woman jumps to her feet with a start and runs back up the stairs. The others follow, calling for her to wait as the scene fades to black…

An insistent dance beat begins punching through and the lights come up to reveal an elaborate, red carpet party being hosted by the Prime Minister at #10 Downing Street. The year is 2041. It is immediately apparent that in this era, most of its citizens appear to be very ‘Me-centric’; we see video monitors everywhere that broadcast the latest tweets, trends, texts and selfies throughout the room. They’ve even sold advertising space on the moon!

Suddenly, several men & women break into a big opening number called “Me”; the irony is that everyone participating is performing the song as if it were, in fact, a solo number.

Through the dialogue of two young women who are obviously not on the A-list, we learn of all of the celebrities in attendance. We meet Stylus, the Prime Minister’s son and the most famous, socially exalted person alive. Stylus has led a very charmed life to now but via the song “Hindsight”, he and his father both express to doubts about the future prospects presented to a person who is not really famous for anything.

Upon returning to the party, Stylus rejoins his best friend, Teagan, whom he has known for almost his entire life. Through every military school and every soiree in between, they have represented two sides of the same coin. One has a famous father and finds everything comes to him quite easily. The other does not and subsequently bears a chip on his shoulder, as well as a tendency towards over-achievement. Teagan soon leaves to find Erin, who he describes as “the only girl for me” and presumably leaves Stylus to tend to the rest of the party’s female population, some of whom refer to him as “The Sweet King”…

Suddenly Eddie Fastone, all-media celebrity of the moment whips out a remote control and turns all of the monitors in the room to his latest infomercial, “The Steady Eddie”. We quickly become aware that this is a sex toy that with a simple press of its bottom button unleashes it’s most unique feature, wherein a 3D hologram of the actor appears and actually makes love to the user!

Several of the ladies in attendance are clearly aroused by this display and it isn’t long before Erin (yes, Teagan’s girl) approaches Stylus, grabbing his necktie and pulling him into an adjacent room. Once alone, we sense there has been a longtime sexual tension between them. In the song “Fooled” they even mock their own flirtation, each knowing full well what the other wants.

As they surrender to their desires, Teagan explodes into the room. The horrified look of hurt and betrayal on his face is not mirrored by Stylus and Erin, who simply shrug the act off as “just sex”. This sends Teagan into a rage, which the other two quickly escape from, Stylus making sure to grab his phone on the way out. As he watches them leave the party, Teagan swears his vengeance upon them in the song “Trickle Down”…

The next day finds us in the Prime Minister’s office, where it’s occupant is frantically searching for something. The monitors begin to show vigils being held around the world for Stylus, who has not been heard from for a few hours and has therefore been presumed either missing or dead. The Prime Minister calls Dr. Davis, the technology’s creator and they “put two and two together”. Apparently, what Stylus grabbed was not his phone, but a time-travel device prototype set for 100 years earlier: 1941.

The PM instructs the good doctor to quickly assemble another device and prepare for a rescue operation. Teagan is summoned and instructed to lead the operation, as he is the most qualified to know how Stylus thinks and therefore track him most effectively. Teagan dutifully accepts the task, knowing full well what his true motivations are: To end Stylus, once for all.

The scene at Dr. Davis’ laboratory is one of kinetic, quirky confusion. We see Dr. Davis dancing with a mop. He shows himself to be a man of some refinement, if from another time. His fedora, spats and suit all suggest that the late 30’s and early 40’s are an era he is clearly enamored with. His Lab Assistant Remains nameless, if only because he is completely removed from the moment. He suffers from a disorder known as FOLA, or Fear Of Looking Away. He, like many others of his generation, has become so completely dependent upon his personal device’s news and musings that he actually needs assistance to function throughout the day, lest he be hit by a bus, fall down stairs or meet some similar fate, due to his complete and utter inattention. Fortunately, a new program has given senior citizens a new purpose, by allowing them to volunteer as “seeing eye people” for the FOLAs. His is Mildred. Hyper, feisty and with nary a kind word to offer, Mildred nonetheless supports the efforts of Teagan, who arrives to pick up the other device and inform Dr. Davis that he will be joining him, as he is the only person who understands the technology of the time travel devices. Davis resists, afraid that kicking a lamp over in the past could wipe out an entire family. “What Could Happen To The Human Race”  details the arguments for and against the idea, but eventually Davis must relent.

Dr. Davis and Teagan arrive in the darkness of 1941, half-expecting Stylus to be curled up nearby in the fetal position and sucking his thumb, as his happy-go-lucky existence could have never prepared him for this. Arriving at a seemingly closed pub, they hear a crowd of men laughing, cheering and jeering inside. They slip in undetected and are greeted by a most astonishing sight: Here was their ‘helpless’ castaway, standing proudly on the bar and using his phone’s “newly upgraded features” to answer trivia questions for beers. He’s obviously already answered several correctly. Stylus’ phone’s green glow fades to black on a question about a ribald old song, “Long, Dark Hallway” which Stylus miraculously recalls his granddad singing to him. The entire bar joins in on the tune in a rollicking, if drunken turn.

At the song’s conclusion, Teagan appears at the piano. Looking his longtime friend straight in the eye, he sings that it’s already “All About You”, ‘friend’. As a fight between the two spills out into the street, yet another intense bombing begins. They do battle whilst dodging debris until Teagan pins Stylus on the ground, raises a brick and brings it down just as we hear a loud explosion and all the lights go out.

As the lights slowly come up, we find Stylus bedridden in a makeshift hospice operated by Maddie. Stylus watches as the residents carefully go through the ritual of preparing for the nightly “blackouts” that London faithfully observed for seven years, he reflects their actions and emotions in “Dim All The Lights Down”.

Over time, Stylus and Maddie form a friendship. Eventually these feelings deepen and Stylus decides to reveal to Maddie his true feelings for her. Unfortunately, he also proves to her that he is in fact, from the future.

Maddie’s reaction is one of disbelief and utter confusion. Although Stylus pleads his belief that they were meant to be together in this earlier time, so that they can build a better future than the one he’s from. Maddie sends him away.

As Stylus walks, he remembers that Maddie’s parents are from a small village that had a very sad anniversary: It was completely devastated in 1941 on this very day, Stylus birthday, which is how he came to know this story.

Running as fast as he can to the village several miles away, Stylus is once again waylaid by Teagan. Once again gaining the upper-hand and beginning to strangle Stylus, a shot rings out. Poor Dr. Davis, the one person who did not want to interfere with time and history, has had to shoot Teagan to save Stylus. Teagan is mortally wounded and as the three men watch the bombing take place in the distance, Stylus and Davis agree the time to leave is now, before anything else can happen.

Stylus heads to the pub to wait for Davis, who must retrieve the other time travel device from Maddie’s place and take it to Stylus. Upon Davis’ return he explains the plans to Maddie, who informs him that her parents weren’t at the village that day and that Stylus needn’t leave. She dashes out into the street and is immediately injured by a blast…

This brings us back to the opening scene, where we now understand the device’s origin and context. As Maddie returns to the street on her way to the Pub, everything seems unusually peaceful and still. The uneasy feeling is the undercurrent for “Sweet King” wherein she swears her unwavering allegiance to her new love.

Arriving at the pub, a muddied company of soldiers plods dejectedly past, murmuring “No One’s Gonna Say” we didn’t try, a phrase that comes to encapsulate Stylus’ feelings of ambivalence over his imminent departure.

But as Stylus presses the button on the last working time travel device…it doesn’t work! He runs after Maddie to tell her the good news, but as she turns they both realize he’s just lost everyone he ever cared about, that he’ll never see any of them again, ever.

Maddie takes his hands and asks him to stop, take this moment and each consecutive one after, as it comes. It’s sweet “Bliss” tonight, she tells both he and the audience…